Richard Kandler lives in London with his wife and two children.

Here he talks about the events that led to the writing of The Prisoner List. 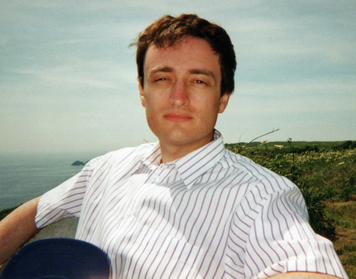 On holiday in Alderney, Spring 1995
"Meet the author? You really wouldn't want to. I'm of very little interest even to me – let alone to anyone else. So I'll keep it short.

When I was thirty, and looked vaguely like I do on this page, I visited a friend of mine in North America.

He'd previously told me that he'd interviewed his late father on video about his experiences as a Holocaust survivor during WWII. It had sounded to me like a strange idea at the time (taping family histories wasn't the kind of thing people had started doing much in those days) and I felt distinctly uncomfortable when he suggested showing me a clip from the tapes.

But, as soon as I started watching, all that changed. I immediately saw the value of what he had done and, at that moment, The Prisoner List was born.

I knew that my own father's experiences as a prisoner of the Japanese had been eventful, but my knowledge of what had happened was only patchy: something about near starvation, something about a railway, and (perhaps more disturbingly) the fact that he owed his life to the bombing of Hiroshima – as I did mine.

On my return home, I told him about the tapes and asked if he would let me video him in the same way. I knew he wouldn't me want to – and he didn't; it was only by pretending to have misinterpreted his polite 'no' as a 'yes' that I managed to record the tapes at all. Within half an hour of starting, however, he was entirely relaxed in front of the camera and was speaking about matters that had remained off limits for fifty years.

He never suggested turning the interviews into a book, and the idea of doing so never crossed my mind until after he had died.

I then asked myself the question: "Is this only of interest to me because he was my father, or would it interest someone who'd never met him?"

I concluded that it was of wider interest, and so The Prisoner List – based not only on my father's tapes but also a wide range of other resources, records and recollections – was born."